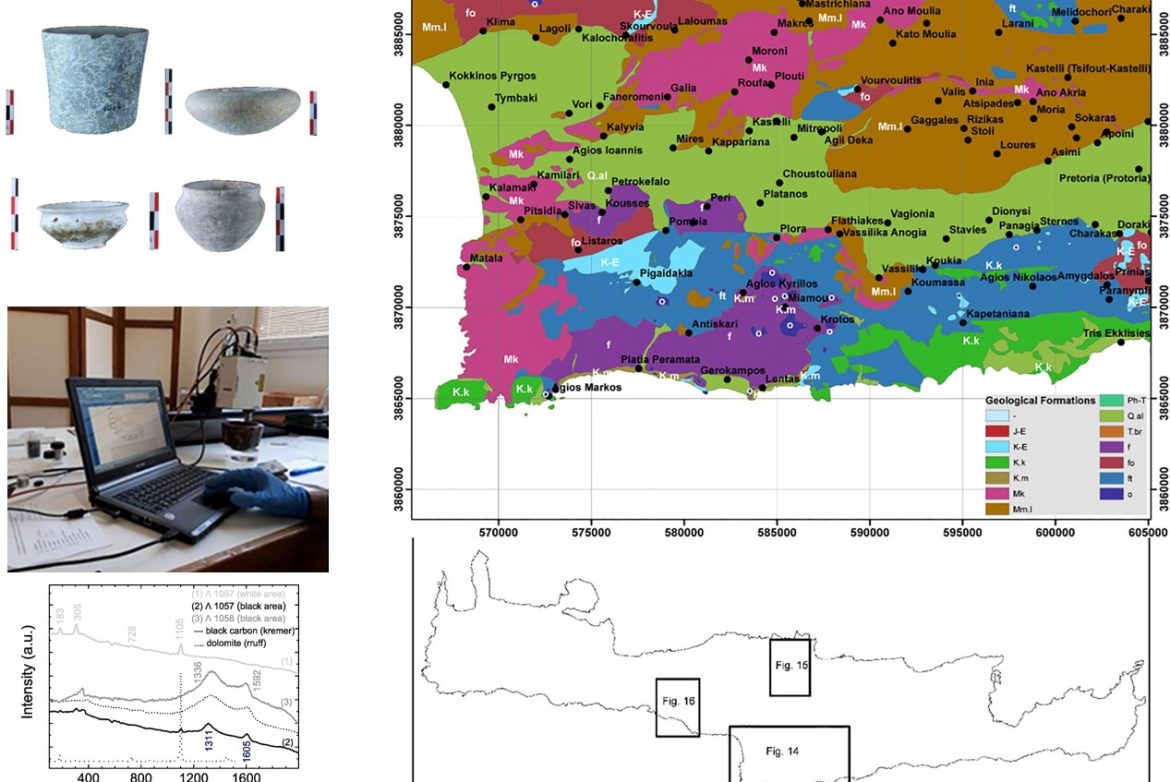 A new article has been recently published in the Journal of Archaeological Science: Reports presenting collaborative work of the Photonics for Heritage Science (PhoHS) of IESL-FORTH , and the Heraklion Archaeological Museum. The paper entitled “Materials analyses of stone artifacts from the EBA to MBA Minoan Tholos tomb P at Porti, Greece (Crete), by means of Raman spectroscopy: Results and a critical assessment of the method” by Georgia Flouda, Aggelos Philippidis, Antonios Mikallou and Demetrios Anglos, reflects research performed in the framework of NSRF 2014-2020 project “HELLAS-CH” (MIS-5002735) and the H2020-INFRAIA-2014-2015 project “IPERION-CH” (GA 654028).

In this study detailed analytical work based on mobile Raman microspectroscopy has been performed on a mortuary assemblage, comprising a group of 59 stone artefacts (vessels, implements and figurines) excavated in one of the richest burial sites in south-central Crete, Tholos tomb P at the Minoan site of Porti (ca. 2700–1700 BCE). Mineral identification was possible for over half of the objects examined and the results expand our understanding, originally obtained on the basis of visual and microscopic characterization of the objects. Patterns of variability in the stones investigated are correlated with the typological repertoire of the final products and compared with data from the neighboring site of Apesokari; further inferences on craft specialization issues are finally drawn. In all, the data obtained lead us to suggest that stone vessel manufacture at Porti was predominantly focused on the exploitation of local softstone outcrops. This hypothesis agrees with the current knowledge concerning the geological formation of the Asterousia area, on the northern fringes of which the site of Porti is located. In parallel, the capacity of mobile Raman microspectrometry to contribute to stone object characterization as regards their mineral composition is discussed along with advantages and limitations of the methodology followed. Raman analysis is preformed quickly, non-invasively, directly on the object and over several spots across its surface for probing heterogeneous mineral distributions. The mobile spectrometer permits measurements to be conducted on location, namely within the museum study facilities. A major limitation with respect to obtaining clean analytical information resulted from strong fluorescence emission observed in some of the measurements, which interfered with the Raman scattering signal. These emissions were attributed to organic materials present on the stone surface either as environmental contamination or as a result of previous, often undocumented, conservation treatments. Finally, the need to collect and thoroughly characterize local stone outcrops as well as archaeological stone objects has become evident and building a representative Raman spectral database will certainly facilitate future studies.