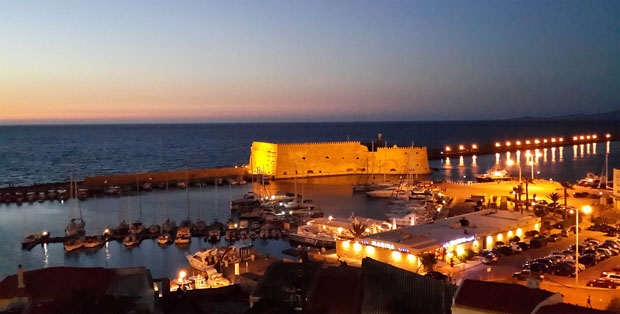 Heraklion is the largest city of Crete and one of Greece’s major urban centers.

Heraklion (GR: Ηράκλειον – also transliterated as Iraklion or Herakleion) is the largest urban centre in Crete, the capital of the region and the economic centre of the island. The first European civilisation, the Minoan civilisation, flourished on this land 5000 years ago. Currently the population of the municipality of Heraklion is approximately 150.000 people. It is a very dynamic and cosmopolitan town, particularly during the summer period when thousands of visitors can be seen shopping in the market or visiting the museums and other places of interest. During the last 20 years, the city has made also a remarkable progress in the academic and technological fields.
Heraklion lies along the North coast of the island, having to the west at about 80 km the town of Rethymnon and at 135 km the city of Hania. To the east is the town of Agios Nikolaos (60km) and the town of Sitia (130km).
Access

The Heraklion airport (HER), named after the Cretan writer Nikos Kazantzakis, is one of the biggest in Greece and receives approximately 15% of the total tourist traffic of Greece. Heraklion’s airport is about 5km east of the city. Major car-rental companies have desks at the airport. Taxi and public bus are available for transfer from/to Iraklion.
Iraklion also receives a lot of visitors by boat. There are daily ferry trips to and from Peiraeus (Athens’ port), and many weekly ones to and from other islands and towns in Greece. The terminal at Heraklion port is within walking distance from the town’s center and there is plenty of taxis to take visitors to their destinations.
The Crete intra-regional Bus terminal is also located close to the port.

The distance from the airport to Heraklion center is approx. 5 km.

There are now three ferry lines going daily between Athens (Departure from Piraeus Port) and Heraklion:

During summer, Minoan Lines and ANEK lines introduce daily routes but these are not available every day.

HOW TO MOVE AROUND IN HERAKLION

Distances – approximately, from the center of Heraklion:

The use of a taxi is a convenient and relatively not expensive mean of transportation in Heraklion. Taxis in Heraklion are colored silver. You can find a lot around in the city streets. You can find them also waiting at the airport, the port, the bus stations, in the Lions Square, the “Platia Eleftherias” Square, and in “Platia Kornarou”.

From the Airport to the center of town, the cost of a taxi is approximately 10 to 15 Euro.

Moving from the Airport

Moving from the Port

Most city hotels are within walking distance from the Port of Heraklion.