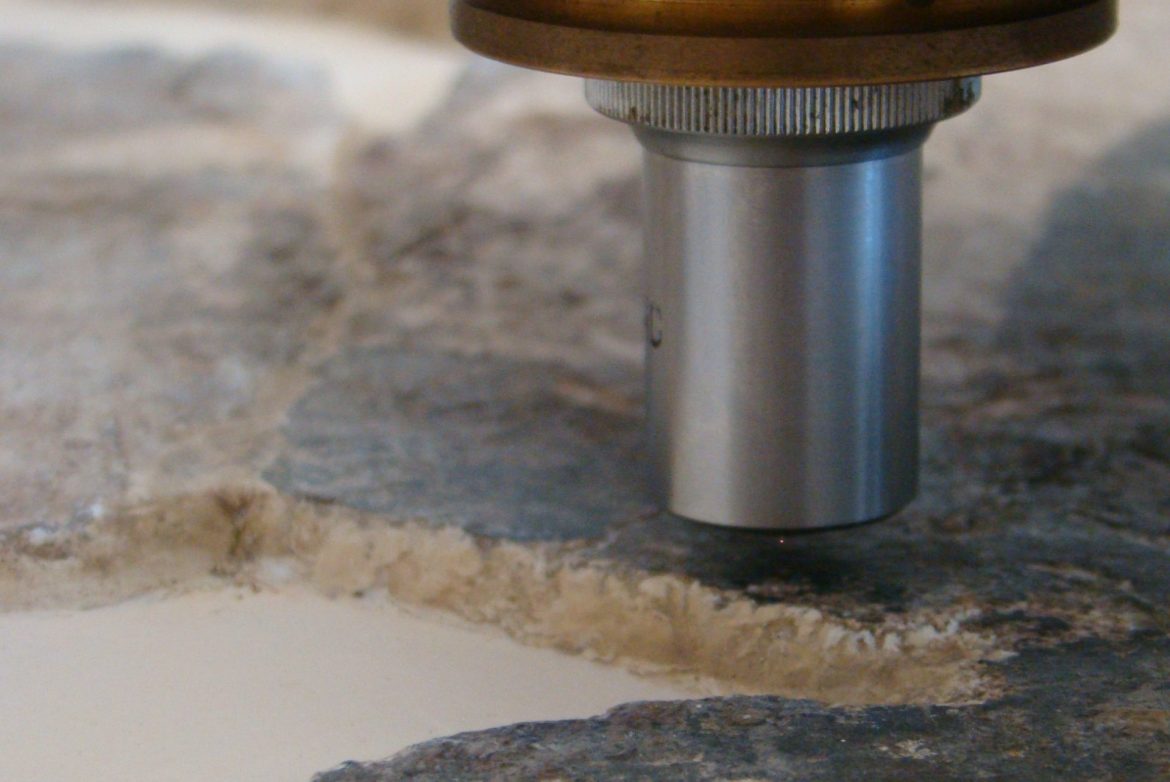 Laser Induced Breakdown Spectroscopy (LIBS) provides insight on the identity and composition of materials in Cultural Heritage objects. The technique is employed in a wide range of applications including the analysis and identification of pigments in painted artworks, the study of metal, ceramic, stone and glass archaeological and historical objects and the characterization of geological samples and grounds.
Raman Spectroscopy gives analytical information on the molecular structure of materials allowing thus the direct identification of inorganic and organic paints, organic binding media and protective coatings as well as mineral information in geological samples.

LIBS is an analytical technique that enables the determination of the elemental composition of materials on the basis of the characteristic atomic emission from a micro-plasma produced by focusing a high-power laser on or in a material. LIBS has been used in a wide variety of analytical applications for the qualitative, semi-quantitative and quantitative analysis of materials. It is rapid, non-destructive and can be used in-situ, therefore its application in the field of cultural heritage is considered very useful.
The analysis by LIBS starts with the deposition of light energy in a small volume (less than 0.1 mm3) of material and within a short time period (5-20 nanoseconds). This rapid energy deposition is achieved by focusing a laser pulse on the surface of a solid target (the object analyzed) and results, through a series of processes, to material breakdown and generation of a micro-plasma plume. The plasma consists of electrons, neutral and ionized atoms, small molecules and larger clusters, and is moving away from the solid surface with typical species velocities in the order of 0.5 to 50 km/s. Immediately upon its formation, the plasma is characterized by high temperature and electron density and as a result, it shows intense broadband emission in the ultraviolet and visible arising from highly excited species. This broadband continuum carries no analytical information, but as the plasma expands in space, the emission evolves with time to a spectrum with sharply peaked features, corresponding to distinct electronic transitions of the different species in the plume. Recording of this emission on a spectrometer produces the LIBS spectrum, which, through a straightforward analysis, yields compositional information about the material examined. More specifically, the characteristic, sharp atomic emission peaks in the spectrum lead to the identification of the elements contained in the minute amount of material ablated, reflecting the local elemental composition of the sample (qualitative analysis).
A typical LIBS spectrum is shown in the following figure. The peak intensity or the integrated emission can in principle be associated with the number density of each emitting species in the plume and this, in turn, with the concentration of specific elements in the ablated material (quantitative analysis).

The painting (tempera on a wooden substrate) was analyzed by LIBS and the composition of the employed paints was identified. Interestingly LIBS could discriminate between type I and II of lead-tin yellow paint due to the presence of Si.

LIBS analysis enables discrimination between original and retouched areas of the painting, based on the different pigments identified (original: lead white; retouched: titanium white).
These findings suggest that the restoration was performed in the 20th century as titanium white became commercially available only after 1920.

Raman spectroscopy gives details about the molecular structure of samples and may identify samples (mineral, pigments) on the basis of distinct spectral bands which correspond to characteristic bond vibrations.
Raman Spectroscopy gives analytical information as regards the molecular structure of materials allowing thus the direct identification of inorganic and organic paints, organic binding media and protective coatings as well as mineral information of geological samples on the basis of spectral bands corresponding to characteristic bond vibrations.
In this research, a micro‐Raman system with a diode laser system (λexc : 786 nm) was used. The beam is focused on the surface of the object under investigation through an objective lens resulting into the irradiation of an area of about 50 μm in diameter. The scattered Raman radiation, collected through the same lens, is guided through a fiber optic to an appropriate spectrograph and CCD detector which records the spectrum. The analyzed region is determined by means of a camera.

The pigments used to paint the sketches were identified through their corresponding Raman spectra to be phthalocyanine green [Cu(C32Cl16N8)].