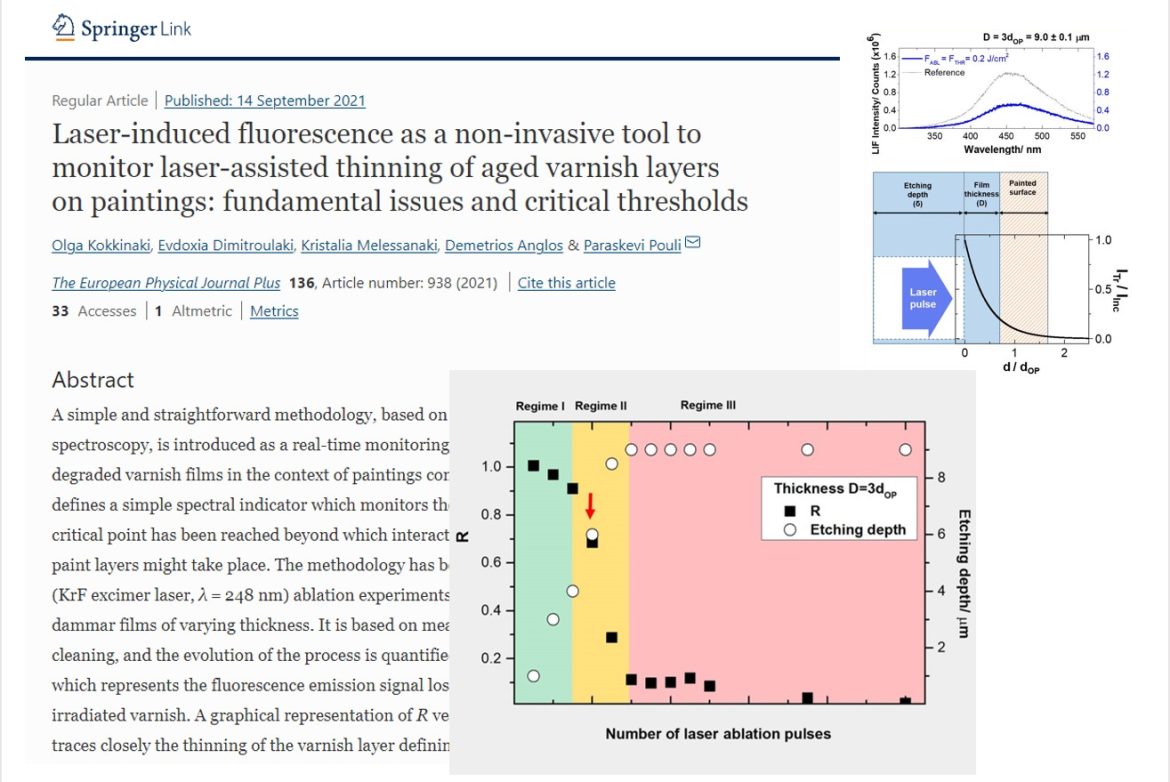 A new article has been published in the “Focus Point on Advances in Photonics for Heritage Science: Developments, Applications and Case Studies“, of The European Physical Journal Plus presenting recent work of the Photonics for Heritage Science (PhoHS) group of IESL-FORTH, Greece.
The paper entitled “Laser-induced fluorescence as a non-invasive tool to monitor laser-assisted thinning of aged varnish layers on paintings: fundamental issues and critical thresholds” by Olga Kokkinaki, Evdoxia Dimitroulaki, Kristalia Melessanaki, Demetrios Anglos & Paraskevi Pouli discusses critical issues as regards the UV laser cleaning of aged varnishes on paintings.
In this study, a simple and straightforward methodology, based on laser-induced fluorescence (LIF) spectroscopy, is introduced as a real-time monitoring tool to follow laser ablation thinning of degraded varnish films in the context of paintings conservation. The proposed methodology defines a simple spectral indicator which monitors the removal of varnish and signals when a critical point has been reached beyond which interaction of the laser beam with the underlying paint layers might take place. The methodology has been developed upon a series of UV laser (KrF excimer laser, λ = 248 nm) ablation experiments, carried out on model, artificially aged, dammar films of varying thickness. It is based on measuring LIF emission spectra during cleaning, and the evolution of the process is quantified by means of the fluorescence ratio (R), which represents the fluorescence emission signal loss in ablated areas relative to the non-irradiated varnish. A graphical representation of R versus the number of ablative laser pulses, traces closely the thinning of the varnish layer defining clear-cut regimes indicative of partial, critical and complete varnish removal. In the critical regime an abrupt change of the value of R is observed and this is of great importance because it determines the limit above which further varnish removal may place the underlying paint-layers at risk. Moreover, the ratio of the varnish thickness over the optical penetration depth is significant for the discrimination of the different regimes for varnish thinning and the adjustment of the methodology for optically transparent or opaque films. All the experimental results are consistent with a simple theoretical description of R, based on the Beer-Lambert law.